We went for a drive today.

From time to time we will go on an adventure of the unknown. I say unknown, because we truly don’t know where we are going. We don’t know what it is we will do. Nor do we know how long it will take. Today was one of those days. My wife has three days off from work. I am on college break. And so the timing was perfect.

Joanne met up with her mum for a coffee in the morning and on her return at 1:30pm we decided to go gallivanting. We cut up a number of small pieces of paper and wrote a single word on each. They were words like, Nth, Sth, East, West. There were words like country, city, town, camping beside a fire, fishing, interstate trip and many others.

The papers were folded up, placed into a shopping bag and shaken around. And then with much fanfare, a paper is drawn out of the bag. Todays draw said ‘East.’ With much anticipation, we drew another paper out of the hat: I was hoping it would be the camping beside a camp fire. But alas it was not. It said ‘Country.’ And the third draw said ‘Town.’

That meant we were going to go bush in an eastern direction to a town. And so we gathered up a few items of extra clothing. Visited the local service station and filled the car and off we went, for a drive into the unknown.

What eventuated was that we left Penrith and ended up at Marulan. (Which technically is south.) From Marulan, we went East – to a little bush town called Nerriga. Nerriga is an unusual town. One of which I have a lot of fond memories, as my grandfather had a farm nearby. It’s only store is the pub. From Nerriga we went down through Sassafras and into Nowra. (Sorry Colin, we didn’t have time to catch up today. Will make time soon.) By now its 6pm and so we stopped at Coles and bought a roast chicken and some rolls and other munchies. We found a nice spot near the river and had dinner and spent a few hours fishing. We caught a few small bream and a nearly legal size flathead. With a bit of uhming and arhring we decided to throw him back in… We packed up at 8:30 and went to MacDonald’s, to use their bathrooms to clean up and get a couple of hot drinks for the drive home. We left Nowra at 8:45, drove through Wollongong, up to Campbelltown, and through to Penrith. And we pulled up at our driveway exactly at 11pmm, 9 hours and 480 km’s later. 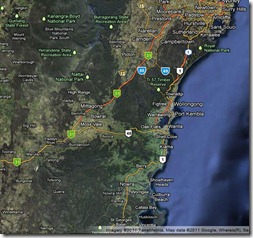 Unfortunately I wasn’t able to capture Penrith in the photo  It is about 1/3 of the way from the top right of the photo.

Though we took the camera with us. We didn’t use it. More is the pity. We passed over flooding rivers. Drove through green country side. And past rugged cliffs.

All in all it was a marvellous day. I can’t wait for the next trip. Who knows where we will end up. We certainly don’t.

I'm an average aussie guy who has lived perhaps a not so average life.
View all posts by Craig Benno →
This entry was posted in life experience, Lifestyle and tagged Our adventure for the day.. Bookmark the permalink.